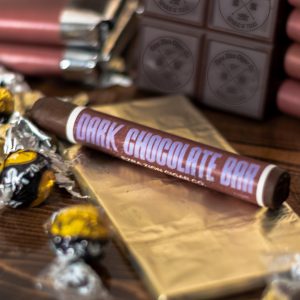 They’ve arrived! Grab your 5-Pack of Dark Chocolate Bar by Ezra Zion before they’re all gone!

What is Muestra de Saka “Unstolen Valor” and more importantly, who is Raul Disla?

Dominican born, Raul Antonio Disla was just 9 years old when he began his journey by working in the tobacco fields of his native country with the Cueves y Torano families. Through hard work, he was promoted to sort and ferment leaf in their pre-industry, which eventually led to him becoming a master roller within their factory. The next couple of decades began with him being torcedor at the legendary Davidoff factory, crafting cigars in the USA again for Cueves y Torano to then become their factory manager and master blender at the Nica Habano factory in Nicaragua. As unusual as Raul’s Dominican-US-Nicaraguan path already was, he was just getting started.
Hired by Dunhill Cigars for his skill as a “master demonstration roller” for British American Tobacco, he travelled the globe for 5 years showcasing Dunhill cigars with the talent of his hands. Followed by two years working with AJ Fernandez in Nicaragua, two other stints back in the United States showcasing his cigar crafting skills, to once again return to Nicaragua as the Cigar Production Manager at Tabacalera Fernandez. In 2015, he was hired and promoted to be the General Manager and Master Cigar Maker at Nicaragua American Cigars in Esteli. It appears he has finally found a “home”.
Being only 44, Raul has had a dizzying career path resulting in a wealth of experience that is very rare in our industry. He does an exceptional job overseeing and executing my Mi Querida and Umbagog lines daily, however he has spent his entire career crafting cigars created by others. So I challenged Raul to create his own unique series of ligas without any input or direction from anyone else including myself. I wanted him to make cigars that were personally satisfying to himself and not worry about the opinions of others, the costs involved, or creating a brand. I was curious to see him be a ligador without any constraints. One of the blends he created really captured my attention, it was simply labelled as “U”.
The entire Muestra de Saka line is about challenging myself to work with unique tobaccos, different techniques and overcoming my own “cigar” biases. It is a linea that allows me to experiment and share cigars that would likely never be enjoyed outside of the factory. Given how liga “U” came from my challenging Raul, my MDS brand is the perfect vehicle to introduce his first truly independent cigar to the world. I asked for his permission to share it, which he graciously granted.
So what about this liga do I find so enthralling that prompted me to risk causing confusion within one of our most popular brands?
I find this blend to be a journey of spice – peppercorns to be precise. It begins with the subtle aromatic tastes of the green peppercorn with that fresh, tangy back note followed by the flavors of the more potent, complex and pungent Tellicherry black pepper berry to finally finish with the more piquant, racier notes exhibited within white peppercorns. Spicy cigars are rather common, but what impressed my palate is how fluid the transitions occur plus how he managed to tame their biting nature that not only allows the smoker to detect these distinctly different pepper notes, but to also never overwhelm the smoker’s palate with sharpness. Simultaneously the blend offers a harmonious cedar-like sweetness that I found captivating. It is a very deft, balanced execution of style of cigar that is often done a great disservice by most makers.
Almost all the cigars in our industry are actually created by very talented people at the factory level like Raul, but they seldom receive any accolades or credit for their work as it makes the brand messaging very confusing for consumers, but it is very important to me that people understand that this cigar is Sr. Disla’s creation. All I did was challenge him to create without worrying about others, smoked the results and convinced him we should share this blend with others, hence the name being “Unstolen Valor.”
My sincere hope is that you find the Unstolen Valor as enjoyable a smoking experience as I do and that it just the introduction to many more great things to come from Sr. Raul Antonio Disla.
We are currently accepting pre-orders for this cigar with the anticipated delivery being in May 2020.
###

ps: Yes, Raul Disla is the brother of Esteban Disla, the master maker at Nica Sueño – needless to say, they are a very talented family